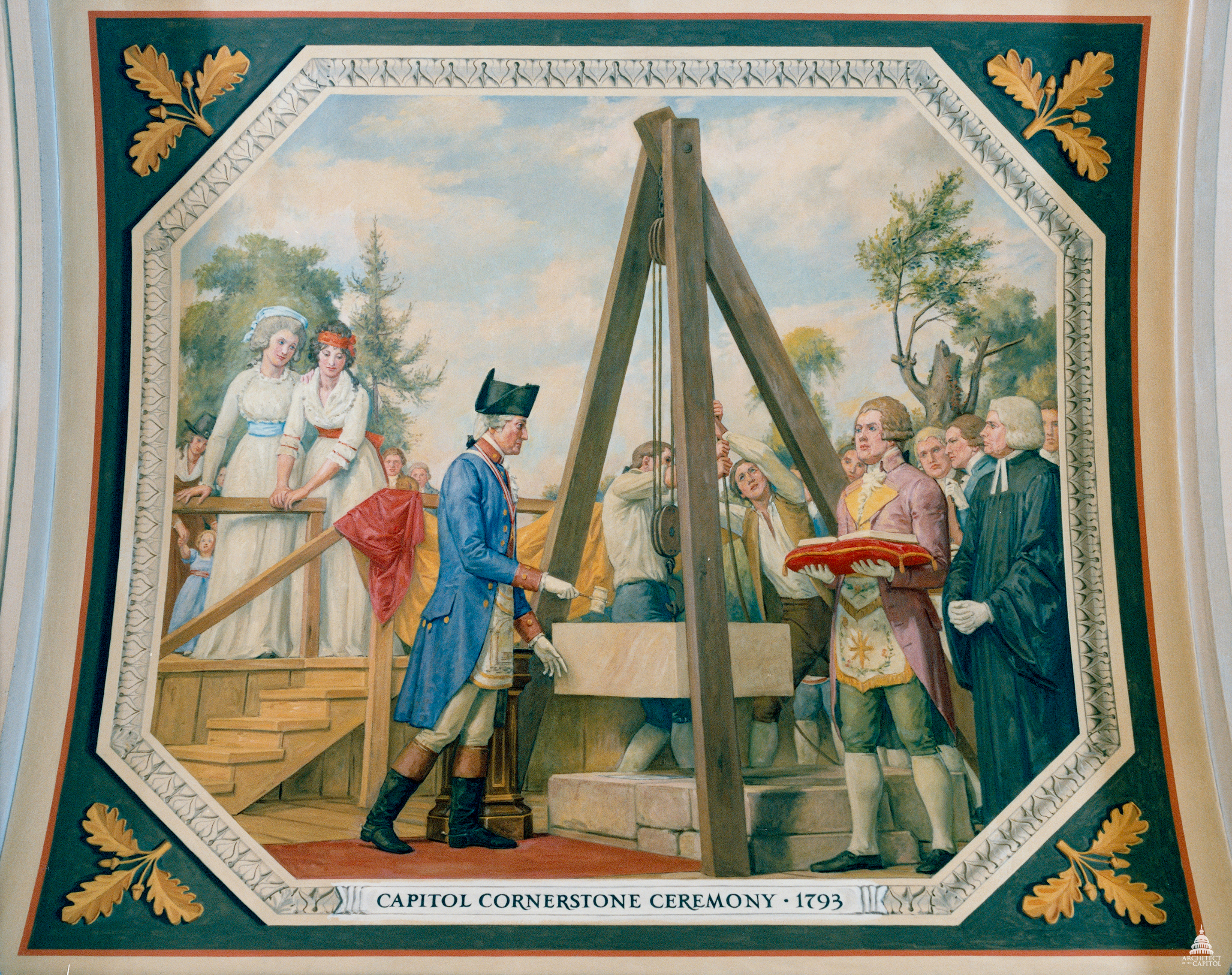 Respond to Putinism! RETIRE THE 23!

Why did George Washington wear an apron to lay the cornerstone of the US Capitol? Perhaps he hoped the building would embody the ideals of the Enlightenment, which inspired Freemasonry and America's Founders.

Alas, since those idealistic days, Congress has mostly devolved into an institution of partisan impotence, leading to executive overreach and judicial activism today. And now it's reached the next lower level - collaboration with a foreign power. What should Democratic presidential candidates do about that? Retire the 23 Putin enablers!

Respond to Putinism! RETIRE THE 23!

"If you're President Putin and you see Trump acquitted, you can continue doing what you're doing and there will be no penalties to pay for it".

Of course, the message from Putin is "let the voters decide" in another election that he will be delighted to influence in every possible way as Republicans pointedly look the other way. To preserve minority rule, you have to do or not do whatever it takes. political-scrapbook.net has been referring to the Republican Party as "Trumpists." This was a mistake. The correct term is "Putinists."

There may never have been a need for explicit collusion or conspiracy if the collaboration has been coincidental - different ideological starting points coinciding with the same strategy and tactics to undermine our democracy - which was built upon the Enlightenment principles of America's founders. Putin has achieved great success in making up a story about Ukrainian interference in the 2016 election as a smokescreen for Russian interference.

Putin hit the jackpot with Trump. He makes a perfect sucker for the former K.G.B. spy - Trump may be too dumb to know any better. The Republican senators who parrot Putin's talking points do know better and by consciously collaborating earn the title of Putinists.

This assault on truth and logic is the real impeachable offense, and it applies to the entire Trump administration and apparently all the Republicans in Congress. Regardless of Putin's efforts, Republicans have been collaborating of their own free will, though Trump's personal interests may never be revealed. His constant efforts to obstruct all inquiries by all means possible suggest Trump has secrets worth knowing rather than that Trump is an innocent victim of a deep state conspiracy.

Republican senators worried about primary challenges should perhaps relax a bit. If the Republicans dredge up more Roy Moores to challenge Republican incumbents in the primary, the Democrats will gleefully recruit more Doug Jones to defeat them in the general election.

Let each Democratic presidential candidate pick out a specific Republican senator up for election in 2020 - there are 23 of them - and devote a minute of their next debate to putting out the facts about what that Republican senator has done to overthrow truth and logic, and promote Putin's foreign policy goals, in order to protect Republican minority rule. Joe Biden can start with Lindsey Graham.

Let the voters decide indeed - among the Democratic presidential candidates according to the clarity they bring to the Senate elections.

Not one of those 23 Republicans has said that Trump might have committed an impeachable offense. Not one has said that they would not have impeached Obama for the same acts. Retire the 23!

Not all the 23 can be defeated in 2020, unless a major recession has started by election day. But all that's necessary is to induce an attitude adjustment among the likely survivors - so when it comes to voting on Trump's conviction and removal, perhaps Republican senators should just vote "present." That way they can say they didn't vote to remove Trump, or they can say that they didn't vote to exonerate Trump, whichever seems to be more advantageous in days to come. It won't surprise anybody if they say the one thing on odd days and the opposite on even days, to cover all their bases. Make them think about those next steps they need to take. Voting "present" may even be attractive to a few Democrat senators running uphill in red states - Jones, Manchin, Shaheen.

What good are all those Democratic presidential candidates?

How the Bloomberg candidacy can help!

If Democratic candidates waste ammunition on the each other, they will just be poster children for why we have too many Democratic presidential candidates.

If Bloomberg spends his millions telling people what's wrong with Putinism and what the positive change any Democratic government could bring, that would be a good thing. If he spends all his money promoting himself and bad-mouthing the other Democratic candidates, he will just be a poster child for why we don't need any more old rich white men in politics.

Bloomberg could just buy Fox News and let the purveyors of lies resume their careers at RT. The Trump base depends on Fox News even more than social media.

But there's a cheaper way for Bloomberg to put his millions to good use!

Just buy a 30-minute ad on Fox News, just before or after Fox and Friends, and put on 23 Democratic presidential candidates (current or recent) to talk one minute each on each of the 23 Republican Senate seats up for election in 2020. Fox is only in it for the money - they'll bite if the money is right.

The idea is for each Democratic candidate to quickly summarize where each Republican incumbent or hopeful really stands on the issues important to average voters, including Fox voters.

The Democrats do not debate or attack each other; it's all focused on the Republican senators, with specifics on what each one really votes for, where the campaign money comes from, and how each is enabling Putinism. The Democratic hopefuls demonstrate their presidential qualities by how they discuss their opponents.

And here are some other suggestions.